I ate Korean food in whole my life, but was not interested in making food that I only could make few Korean food. So I decided to learn Korean food, and start listening class from 2 weeks ago. I’m listening the “Korean food Craftsman cook” certificate class to learn the Korean food.

However, to acquiring this certification is not that easy. Because firstly, there are 51 kinds of Korean foods to learn and you have to remember all the process of making each kinds of the food. In the test day, you have to make 2 foods which are selected randomly. Secondly, you have to cut the ingredient in the fixed sized. For example, the mushroom should be in 0.2cm thickness and 3cm length in the ‘Korean mushroom porridge’ cuisine. In every food recipe, there are fixed standard of the ingredients size. Finally, you have to make the food in on time. Normally the time limit is 20-30 minutes for one food. 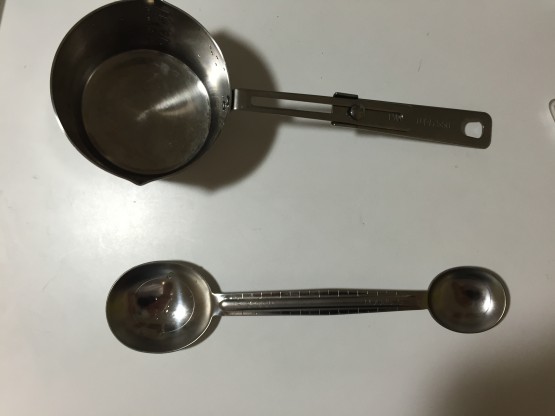 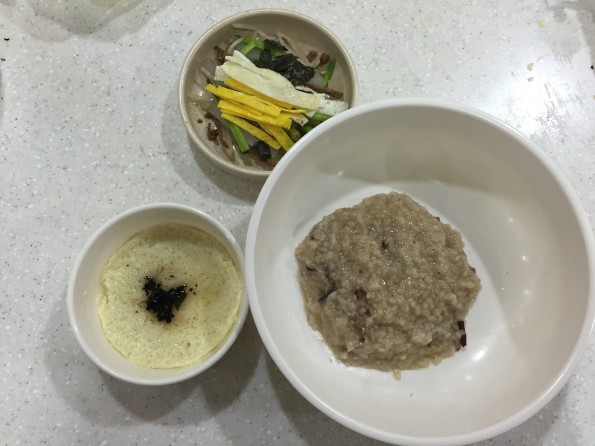 This is the food which I finally made. This food visual seems not that yummy, but the taste was not that bad. 🙂 I brought home and my family ate it all. I hope I can make it better in next time. 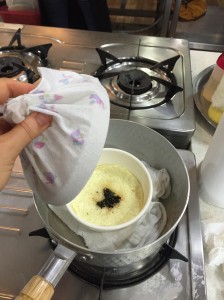 To make the Korean Steamed egg, first pour the water five times as much as the egg amount, and then put it inside the pot and boil about 13-15 minutes. Then Turn off the fire and put the sliced mushroom on the top of the egg and steam it. The black one which is in top of the egg is the sliced mushroom. In this time, I pour the water little more than the suitable amount that the steamed egg was not made well. 😦

Korean frequently eat the steamed egg dish and it is good for eating with spicy food. Because steamed egg helps you to feel less spicy.

What I felt during making Korean food is we have to throw away many parts of the ingredient to make the Korean food pretty. The egg which is cooked separately from yolks and whites should be cuted in 0.2cm length and in 4cm thickness. I threw away all the end of the egg. 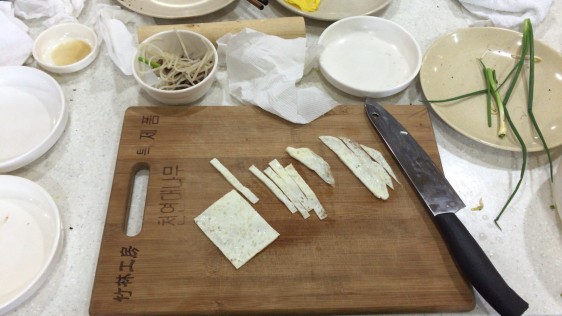 Cooking tip what I learned in the class is that if you want to make the good shape of the egg slice, wipe the cooking oil with the kitchen towel after putting the cooking oil in the pen. Then the bubbles can be less made in the flat egg.

Thanks for reading. Next time I will introduce about making the Bibimbap(mixed rice) Korean dish.:)